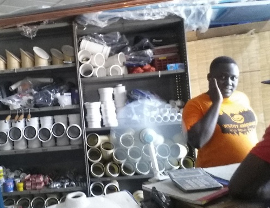 Wisdom Muronda is a 27 year old young man who was trained in business and entrepreneurship in 2015 by Junior Achievement Zimbabwe in partnership with Zimbabwe Works: International Youth Foundation program funded by SIDA, USAID and DFID. In 2015 Wisdom was running a small internet cafe in his neighborhood in Mbizo Township in Kwekwe. He used to have one computer in his cafe and after the training which equipped him with savings culture and investments coupled with the access of finance from Inclusive Financial Services Micro-finance, he saw himself expanding his business in 2016 where he added 3 more computers in his cafe alongside hardware supplies though he would do this by orders from his usual cafe clients. His income grew from $500 net profit per month to $2000 in 2017. Beginning 2018 he managed to open a fully-fledged Hardware shop in the city Center where he is operating as Wisytity Hardware. His net income with the new shop in town ranges from $3000-$4000 per month and his stock will be at least $10 000 every month.

Wisdom attributes his success to hardworking, and focus. He testified that the exposure he got from the JAZ training molded him to be a determined entrepreneur. He also pointed that the mentor ship he got from already successful hardware owners also contributed to his success. He reiterated that he is now able to take care of his extended family financially providing them with their basic needs. Access of finance was key in his support from JAZ. However Wisdom pointed out that the economy instability has been a challenge in his business as well as high rentals in town would take his larger chunk of his profits. He pointed out that there is need for some advocacy to be done engaging the City council to allocate business stands to aspiring and successful youths for them to have sustainable business growth.