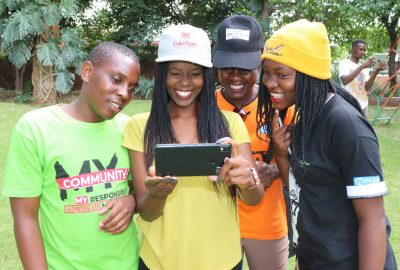 Meet JA Zimbabwe alumni Mona Lisa Dube, a journalist by profession. Currently she works with ZiFM Stereo where she hosts a Talk Show host for current Affairs Programmes The Platform, Business Unusual and the Yzone. Her shows primarily cover trending political and Business Issues  and the Y Zone which is a youth oriented program. Monalisa is also  a reporter as well as a news Anchor with the same institution.

“I have received a couple of Awards for work. In 2017 I was awarded the Youth Coach of the  Year by the International and  as well as the Best radio that has a fair representation of both men and women as sources by the Zimbabwe Gender Commission,” she said.

She is also very passionate about youth issues and her line of work has given her a platform to interact with youths from different walks of life.

Monalisa joined JAZ in 2009 when she was a Lower 6 Commercial Student at Queen Elizabeth School.

“The JAZ team came through to our school or we attended one of their workshops I don’t quite recall how we got to know about JAZ but our class was sold to the idea and we started off our company . I was then made CEO for our Company,” said Monalisa.

“What interested me the most was how everyone in my team took the project very seriously. I worked with a competent , innovative team that never gave up. I remember when incurred a major loss in one of our projects where we hosted a movie afternoon for different schools. It was  poorly attended and some of those that came demanded a refund as we could not find the movie that we had promised them. We failed to recover our production costs sinking our business into a major loss. I was impressed by the resilience my team had and we decided to expand the scope of the business which made up profitable and we managed to recover from the major loss that we had experienced.”

Monalisa believes that her biggest skills of managing people, identifying skill  and talent and placing it where it performs best were some of the experience that sharpened her leadership skills as later on she was appointed Deputy Head Girl at Queen Elizabeth the next year. “I had a bit of extra weekly income that I got from our JAZ project that year.

I also got to shadow George Guvamatanga for a day as part of my award for being the outstanding JAZ CEO in Harare. That was also an exciting part of my JAZ experience.”

Lastly Monalisa believes that she can somehow partner with JAZ on her youth program the Y Zone that airs weekly on ZIFM.

“With that platform I can reach out to other youths on a number of issues not limited to entrepreneurship. And I also believe they can learn a few nuggets on leadership from me, said Monalisa.