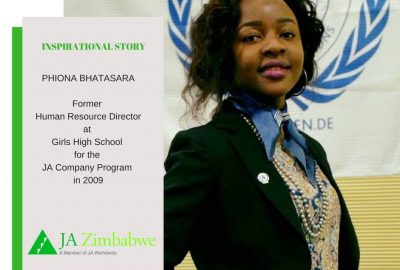 The story of Phiona Bhatasara is a testimony of the impact of life skills, entrepreneurship and mentorship in developing young people especially women. Phiona is a 25-year-old JA Alumni who participated in the JA Company Program at Girls High in 2009 in partnership with Barclays Bank.

She was the Human Resources Director for their JA Company at Girls High school. She would handle the recruitment, motivation, and any other human resources issues of the company. Through this exposure she gained skills in leadership, public relations and entrepreneurship.

She went on to study BSc in Economics at the University of Zimbabwe where she was also elected to be the Vice Project Leader of Enactus. She has also obtained the opportunity to work as research assistant for the Institute of Environmental Studies in March 2015, and researcher for the Postal and Telecommunications Regulatory Authority of Zimbabwe in September 2015.

Currently she is based in Germany where she is studying Master’s in Economics at Universitat Siegen, and a delegate of the Model United Nations in Economic and Social Council. As a delegate Phiona focusses on strengthening the coordination of humanitarian assistance, integrating sustainable development into post conflict reconstruction and implementing sustainable development goals. In November 2017 she was elected the Best Delegate representing Guyana in the Common Wealth Heads of Government Meeting to combat climate change.