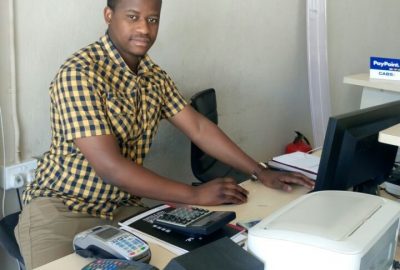 Nicolae Gambiza, aged 24, is a beneficiary of the Internship program offered by Junior Achievement Zimbabwe (JAZ) in partnership with International Youth Foundation. Nicolae is a holder of a Bachelor of Commerce Honours degree in Business Management at Midlands State University. He graduated in October 2014 and had stayed eight months without obtaining employment. His joy came when he came across an advert requiring for interns at Junior Achievement Zimbabwe.

After applying for the internship, he was called for an interview. This raised his anxiety as he was looking forward to obtaining employment and was very nervous about interviews. He was relieved when he was informed that he had successful in the interview and thus attended the 3 day work-readiness training from 2 June to 4 June 2015. The training covered the essential life skills that included work ethics, interview skills, CV Writing, Communicating Effectively in a Workplace, Building Rapport, Mentorship, and Working in Teams. On the 8th of June 2015 he began his internship at ZimSeller. The internship placement helped him in business development where they would hold meetings and review progress. This exposure assisted him to be able to be more creative in how the company can be more productive. Within a month having started internship placement, he was called for an interview at Coloursell Furniture. Through the interview skills he had received during the work-readiness training he confidently participated in the interview. This gave him an urge over the other interviewees leading to him obtaining Graduate Trainee position in the Sales Department on the 1st of July 2015. During his graduate traineeship he managed to display ability to communicate effectively with customers, supervisors and colleagues; good teamwork; good planning and stock management; and an excellent work ethic. After the 1 year graduate trainee program he was promoted to become the Branch Manager at Coloursell Furniture. This gave him greater sense of self-actualisation and self-esteem. He realised that the opportunity to be influential does not lie in the state of the economy though rather in the skills and abilities that one possesses.